This post was inspired by two things, a group of teenage girls buying condoms at the supermarket who didn’t know condoms came in different sizes (Education Department seriously, what are you teaching them!) and a wonderfully patient and lovely client who started me on the female condom journey.
So condoms.

Yes they do come in sizes. If you read the packet you will notice that they will say something like Nominal Width 56mm. Condom sizes are all about width, because they unroll the length measurement doesn’t matter. Nominal width is how wide near the opening they are when laid out flat and unstretched. While most guys can comfortably use any of the regular sizes it’s important to know if you need to move up or down the size scale. Too tight and they will be uncomfortable and may restrict ejaculation, and possibly increase the risk of them tearing. Too loose and they may slip or allow semen to leak out.
There are lots of brands and types but here are some of the commonly available condoms and their nominal width:
Glyde Slimfit 49mm
Ansell Lifestyles Form Fit 52mm
Ansell Zero 52mm
Durex B Close 52.5mm
Ansell Lifestyles Ultra Thin 53mm
Hero Regular 53mm
Skyn Original 53mm
Ansell Lifestyles Regular 54mm
Naked Classic 54mm
Ansell Zero LRGR 55mm
Durex Natural Feel 56mm
Durex Regular 56mm
Glyde Maxi 56mm
Skyn Large 56mm
Ansell Lifestyles Large 58mm
Naked Larger 60mm
The Glydes are usually the ones that are given out for free at clinics and can be bought in bulk. The Skyns are latex free which is essential if either partner has a latex allergy or sensitivity, I prefer them because I can get a mild thrush if I’m using a lot of latex condoms (also I think they taste nicer!).
I had a rummage through my drawer and these are the condoms I had to hand (seriously! it even surprised me but a good sex worker will have options for any eventuality) from smallest to largest. I also put their packaging in shot so if you want to try a particular size you’ll be able to recognize them quickly in the shop, but I don’t have them ALL (they’re not Pokemon!) so it’s just a guide. 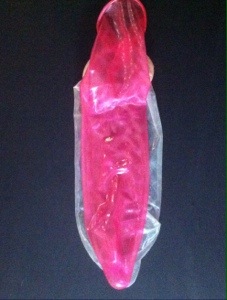 They aren’t as common as male condoms but they have a couple of advantages that might make them worth a try. They are latex free although check the packaging if you have an allergy just to be sure. And they might give a different sensation for guys who really, really, really don’t like wearing condoms or feel they reduce sensation to the point of hampering orgasm. The downside is they are tricky to put in which can put a dampener on the mood (although they can be inserted in advance and worn for a while), you have to keep a close watch that the penis stays inside and the opening of the Femidom sits outside the vaginal opening which is not that glamorous to look at and might not be great for cunnilingus. This is a nice video of how to insert a Femidom, I would recommend getting a couple more than you’ll think you’ll need so you can practice beforehand and use lube on the penis. You can get Femidoms from Family Planning Tasmania (let Google be your friend outside Tas or to find online suppliers).
Dental Dams are not a condom replacement but a useful addition to the safer sex toolkit. 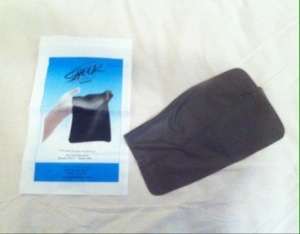 They are a silicon sheet that can be placed over the vulva or anus for oral sex (cunnilingus and rimming). As mentioned above yes STIs can be transmitted through oral sex or it may be preferred from a hygiene perspective. You can get dams from Sexual Health Service Tasmania (let Google be your friend outside Tas or to find online suppliers). If you can’t find any (or are into DIY) they are easy to make from a condom. Unroll the condom and use some scissors to cut the tip off then make a cut down the length of the condom, voila, you have yourself a square of latex to use as a dam. To use them pop a little bit of lube on the skin the dam is going over, then lay the dam over, hold it down and off you go. Simples!
And unless you practice abstinence there is no such thing as safe sex, only safer sex so be brave and get tested. I recommend Sexual Health Service Tasmania, in Hobart they have a walk in clinic on Thursdays or you can make an appointment anytime and they have clinics across the state. Family Planning Tasmania are also good and don’t forget your GP.